4. You Never Knew My Mind

The year 1967 was certainly very much a year of transit for my father. He wrote “You Never Knew My Mind” that year certainly about his first wife Vivian.

“Gold All Over the Ground,” finished on this album by Brad Paisley, is likewise dated that year, and undeniably about my mother, June Carter. The words for “You Never Knew My Mind,” like the words for “Gold All Over The Ground” were something that he specifically would not necessarily sing in the public, because they dealt with his feelings for the loss of his relationship with his first wife. These writings were put away for different reasons. Perhaps the words on paper were just that forgotten song, or poem. But these two specifically, “Gold All Over The Ground” and “You Never Knew My Mind,” were put were put away because they weren’t ready to be sung.

In all of my father’s previous recordings, there is no melody to be found for either of these writings. I met Chris Cornell the first time backstage at a show in Seattle. It was not long after the grunge movement had really, really gotten in full swing. Kurt Cobain had just recently passed away. I met Chris Cornell backstage and he came up to me and I said, “I love your music, man. Louder Than Love changed my life a few years back.” Chris Cornell said, “You know, I was listening to your dad when it wasn’t cool to listen to your dad.” 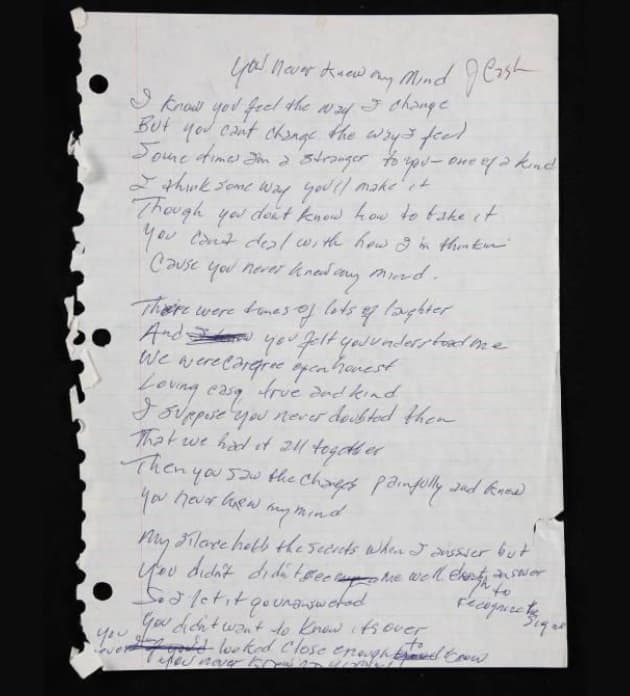 He said, “In 1984, when all of my friends were listening to Led Zeppelin records and whatnot, I was listening to Johnny Cash.” My father was one of the most important artists in his lifetime. He took it as an honor to work on these words, but he connected them to his own life and his own experience. “You Never Knew My Mind” to me is one of the most powerful and emotional performances I have ever heard in my life. The first time I heard the song it was a demo he recorded it in a hotel room closet. sent me a picture of that closet and the microphone set up, his wife Vicky and his clothes on the hangers around, his guitar leaning on a chair.

The excitement coming from Chris to be a part of this was evident. He and I got to be friends. His honesty comes through in his performance, and I believe that’s what makes it so powerful. Still, every time that I listen to it, I’m emotionally overwhelmed and I can’t help but be that way. I hear his broken heart in that song, the resolute sadness, the loss. I miss him dearly, both as an artist and as a friend.

He told me that for sound check doing his tour of performances with just he and his guitar, that he would sing You Never Knew My Mind to check the microphone.

When I listen to the song now, I hear a frailty beneath the strength of the lion with a thorn in his side. Ten thousand things could be read into the words. The beauty of it is his honest connection of artistry: that’s what remains strong.